How much should we “save for the future”?
Should we save money? Should we preserve food?

Scripture says it is wise to save up enough food to get you through the winter:

Go to the ant, O sluggard; and see, and emulate his ways, and become wiser than he. For whereas he has no husbandry, nor any one to compel him, and is under no master, he prepares food for himself in the summer, and lays by abundant store in harvest. (Proverbs 6:6-8, Brenton’s LXX)

On the other hand, Scripture says it is foolish to go overboard in saving for the future:

And He said to them, “Take heed and beware of covetousness, for one’s life does not consist in the abundance of the things he possesses.”

Then He spoke a parable to them, saying: “The ground of a certain rich man yielded plentifully. And he thought within himself, saying, ‘What shall I do, since I have no room to store my crops?’ So he said, ‘I will do this: I will pull down my barns and build greater, and there I will store all my crops and my goods. And I will say to my soul, “Soul, you have many goods laid up for many years; take your ease; eat, drink, and be merry.”’ But God said to him, ‘Fool! This night your soul will be required of you; then whose will those things be which you have provided?’

What is the difference between the wise man who saves food for the winter, and the foolish man who stores up an abundance of grain in his barns? And how does this principle apply to bank accounts, 401(k)s, IRAs, and other retirement accounts? Just how much should we save for the future?

At what point does our savings account switch from “good stewardship” to “covetousness”?

Think from the perspective of the wise man referenced in Proverbs. Like the ant, he recognizes the cycle of seasons, knowing that he cannot harvest year-round. Throughout the winter months, he will need something to eat, until the weather is warm enough for him to plant again. So, in wisdom, he lays back an “abundant store” of food, enough to last through the winter.

The assumption is that, when spring arrives, he will need to work again.
The cycle of planting and harvesting continues. He continues to work.

Now consider the perspective of the foolish man castigated by Christ:

St. Basil the Great–in agreement with many other saints–does a good job of describing the Christian view of these matters:

“The harshest form of covetousness is not even to give things perishable to those who need them. “But whom do I treat unjustly,” you say, “by keeping what is my own?” Tell me, what is your own? What did you bring into this life? From where did you receive it? It is as if someone were to take the first seat in the theater, then bar everyone else from attending, so that one person alone enjoys what is offered for the benefit of all-this is what the rich do. They first take possession of the common property, and then they keep it as their own because they were the first to take it. But if every man took only what sufficed for his own need, and left the rest to the needy, no one would be rich, no one would be poor, no one would be in need.

Did you not fall naked from the womb? Will you not go back naked to the earth? Where is your present property from? If you think that it came to you by itself, you don’t believe in God, you don’t acknowledge the creator and you are not thankful to Him who gave it to you. But if you agree and confess that you have it from God, tell us the reason why He gave it to you.

Is God unjust, dividing unequally the goods of this life? Why are you rich, while the other is poor? Isn’t it, if for no other reason, so that you can gain a reward for your kindness and faithful stewardship, and for him to be honored with the great virtue of patience? But you, having gathered everything inside the empty bosom of avarice, do you think that you wrong no one, while you rob so many people?

Who is the greedy person? It’s him, who doesn’t content himself with what he has. And who the thief? He who steals what belongs to others. And you think that you are not greedy, and that you do not rob others? What had been granted to you so that you might care for others, you claim for yourself.

He who strips a man of his clothes is to be called a thief. Is not he who, when he is able, fails to clothe the naked, worthy of no other title? The bread which you do not use is the bread of the hungry; the garment hanging in your wardrobe is the garment of him who is naked; the shoes that you do not wear are the shoes of the one who is barefoot; the money that you keep locked away is the money of the poor; the acts of charity that you do not perform are so many injustices that you commit.”

The book of Proverbs promises us:

“He who gives to the poor will lack nothing,
but he who closes his eyes to them receives many curses.”
(Proverbs 28:27)

And Jesus plainly tells us:

“Do not store up for yourselves treasures on earth” (Matt. 6:19)

But as long as there are still people in the world who are starving, sick, or unclothed,
how can you justify putting another $100 into your 401(k)?

“But I’m just being a wise steward, saving for a rainy day.”

Friend, please open your eyes . . .
Your brother is standing outside, and for him, it is already raining. 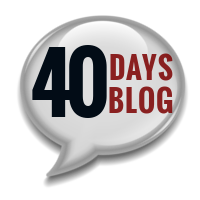 This is day eight of the 40 Days of Blogging.
For more articles on canned food, check out these bloggers.

I serve as a priest at Christ the King Orthodox Mission in Omaha, Illinois, and am blessed with eight children and one lovely wife. I contribute to On Behalf of All, a simple blog about Orthodox Christianity. I also blog here at The Orthodox Life.
View all posts by Fr Joseph Gleason →
This entry was posted in 40 Days of Blogging, Luke 12:15-21, Matthew 6:19-21, Money, Proverbs 6:6-8. Bookmark the permalink.