Icon of Sts. Joachim and Anna, embracing near their marriage bed, preparing to conceive Mary, the Mother of God

Alayna was the lovely daughter of a successful farmer. Very modest and just a little shy, she grew up in a small town, and went to the same school her entire life.

When she was a senior in high school, she met Michael, a handsome, outgoing military kid who had moved a dozen times and had lived on 3 different continents. As luck would have it, they were the same age, and they ended up in most of the same classes.

The first time she saw him, she blushed, she could feel a great deal of warmth rising to her neck and cheeks, and she was pretty sure she could feel her heart skip a beat every time she whispered, or wrote, or even thought about his name.  She hadn’t even worked up the courage to speak to him yet, and already her mind was filled with vivid pictures of her and Michael married, in-love, and happy forever.  She could see her glistening engagement ring, her elegant wedding, and a lifetime of romantic, candlelight dinners with her one true love.

Michael was strong, handsome, and intelligent, and no matter where he moved, it never took long for him to receive plenty of attention from the local girls.  And of course when all of the other girls started paying attention to Michael, that just made Alayna want him more.

But it didn’t take very long before Michael noticed Alayna, too. She had soft auburn curls that gently flowed around her shoulders, a beautiful smile that reminded him of his mother, and a lovely figure that made him intoxicated with love and almost unable to speak. She had a voice like a songbird, and he secretly daydreamed about what it would be like, just to hear her say his name. Eventually, Michael worked up the courage to ask Alayna on a date. She gladly accepted. In short order, these two fell deeply in love with one another, and their romance was the talk of the entire town.

Michael spent less and less time with his family and his friends. All he could think about was Alayna. He spent every minute with her that he could, and when he couldn’t be with her, he was daydreaming about her. The very thought of her filled him with an indescribable sensation that made him feel like he could almost fly.

Alayna was so enraptured with Michael, that she could hardly even pay attention to her schoolwork anymore. Before meeting him, she had taken careful notes in every class. Now, her thoughts stayed forever on Michael, and she frequently caught herself writing his name in her notebook. Of course, she always used a little heart to dot the “i” in “Michael”.  She was also fond of writing her own first name, followed by his last name, dreamily looking ahead to the day when they could be married.

Michael and Alayna stayed close, making sure that they went to the same college. About halfway through college, they finally got married, and the wedding was even more beautiful than Alayna had imagined. Her father spared no expense. The flowers, the music, and the dress were perfect. Just as she had always dreamed, Alayna felt like a real princess. Michael was thrilled to be married to the woman of his dreams, and he took great delight in the honeymoon. For a week and a half, the two lovers enjoyed sunshine, relaxation, and each other.

They both finished college near the top of their class, and soon thereafter they found themselves engaged in very successful careers. Between the two of them, they made a very comfortable living. They had a large, elegant home, with a perfectly manicured lawn and flower garden.

Just before their 10th wedding anniversary, they purchased a vacation home on the same island where they had spent their honeymoon. Michael was glad, because when Alayna was around, it made him feel happy. And Alayna was glad, because when Michael was around, it made her feel happy. They were both enjoying life, they were enjoying each other’s company, and they felt just as much in-love as they ever had.

Emotionally, how does their love story make you feel? When you imagine the ideal romance between a man and a woman, are these the sorts of mental pictures that you have? For your daughter, or for your son, or for yourself, is this the sort of love story that you would like to have? Do you believe that the story of Michael and Alayna does a good job of illustrating what a good marriage relationship is like?

Halfway around the world, consider another marriage which takes place:

John is a skilled carpenter, and he works hard with his hands. He is not wealthy, but he has a small, comfortable home, and he earns enough to keep the bills paid. His parents give him a call, letting him know that after years of careful searching, they found a lovely young girl named Sarah who they think would be a good wife. Sarah’s parents have also agreed to the marriage, and the only thing remaining is for John and Sarah to meet, and to give their consent.

Over the next several weeks, the two families get together several times. John and Sarah take these opportunities to talk to each other, and to get to know each other. At the end of this time, John tells his parents that he agrees with their choice. Sarah seems to be a very godly, hardworking woman, who loves children, and is a skilled homemaker. John agrees to have her for his wife. Likewise, Sarah tells her parents that she would be happy to marry John. She is convinced that he is a godly man who will be good to her, and who will work hard to provide for his family. With John and Sarah both in agreement, both families proceed with the wedding plans. The wedding is simple and joyful. John closes his carpentry shop for a few days, and the newlywed couple celebrates their honeymoon by spending a week in their own home.

Over the next year, she begins decorating the home and putting it in better order, while John faithfully works to build his carpentry business. They spend a lot of time together, getting to know each other better. And by the middle of the second year, they are thrilled to welcome their first child into the world. As a family, they pray together daily, and they are faithful members of their local church community. John and Sarah intentionally care for one another, and over time, they grow to love each other deeply. 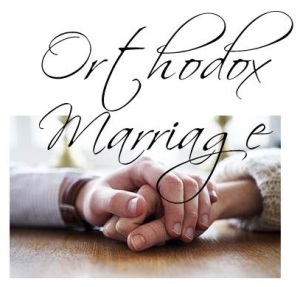 By their 10th wedding anniversary, they have each other, they have six beautiful children, and John has managed to add a third bedroom onto the house. The first room is theirs, five of their children sleep in the second room, and the third bedroom is a nursery for their six-month-old daughter. John and Sarah work hard to keep the home running smoothly. They take care of each other, they take care of their children, and they do their best to help out their friends and neighbors whenever they are in need. Their family prays together daily. They don’t have enough money to afford nice cars or vacations, but their home is a sanctuary where they are kind to one another, and where their children are being raised to love Christ.

Emotionally, how does this love story make you feel? When you hear about the marriage between John and Sarah, does it make you feel the same way you felt when you thought about Michael and Alayna? When you try to imagine the perfect marriage for yourself, or for your son or daughter, which marriage comes closer to your ideal? Which story do you think better reflects God’s design for marriage?

The first story bears all the standard traits of an ideal American “love story.” Michael and Alayna are good-looking high-school sweethearts who meet, marry, and then ride off into the sunset, “happily ever after.” A good education, a high income, and constantly feeling “in love” are the central facts of their marriage. Their relationship with God, and their children (if they have any), are never even mentioned.

The second story would horrify many Americans and western Europeans. John and Sarah did not find each other and date. Their marriage was practically arranged by their parents. They didn’t know each other well enough to have any significant feelings of being “in love”, prior to their wedding. They have no advanced education, and their income is limited. But they both have a godly attitude toward their marriage, and they are successfully building a Christian household. Christ is at the center of their home, and they are raising a houseful of six godly children. 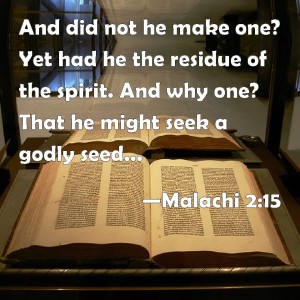 But what is the purpose of marriage?
What is the reason for it?

The prophet Malachi provides a straightforward answer to this question:

But did He not make them one, Having a remnant of the Spirit? And why one? He seeks godly offspring. (Malachi 2:15 – NKJV)

Has not the one God made you? You belong to him in body and spirit. And what does the one God seek? Godly offspring. (Malachi 2:15 – NIV)

Didn’t God make you one body and spirit with her? What was his purpose in this? It was that you should have children who are truly God’s people. (Malachi 2:15 – GNT)

Didn’t God make you one? Your flesh and spirit belong to him. And what does the same God look for but godly descendants? (Malachi 2:15 – NOG)

You were united to your wife by the Lord. In God’s wise plan, when you married, the two of you became one person in his sight. And what does he want? Godly children from your union. (Malachi 2:15 – TLB)

God made husbands and wives to become one body and one spirit for his purpose—so they would have children who are true to God.
(Malachi 2:15 – NCV)

Hasn’t he made the two of you one? Both of you belong to him in body and spirit. And why has he made you one? Because he was looking for godly children. (Malachi 2:15 – NIRV)

What is one of the central purposes of marriage?
Why does God join a man and woman together in holy matrimony?

And why has he made you one? Because he is looking for godly children.

I serve as a priest at Christ the King Orthodox Mission in Omaha, Illinois, and am blessed with eight children and one lovely wife. I contribute to On Behalf of All, a simple blog about Orthodox Christianity. I also blog here at The Orthodox Life.
View all posts by Fr Joseph Gleason →
This entry was posted in Contraception, Holy Matrimony, The Orthodox Christian Family. Bookmark the permalink.

8 Responses to God’s Purpose for Marriage